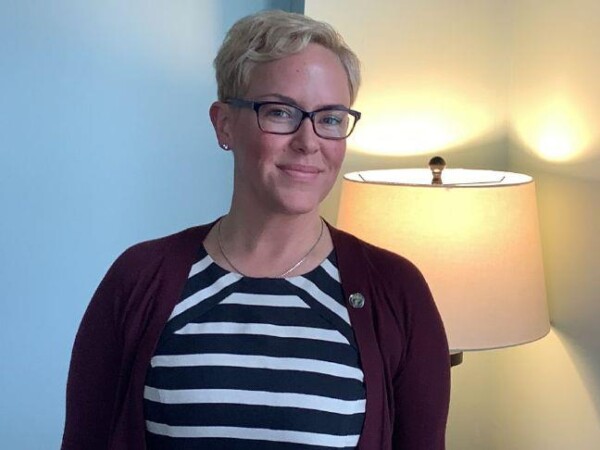 Six months after Richard Douglas resigned as City Manager of Covington, Krystal M. Onaitis, a native of Central Virginia, was hired on July 15, 2019 to replace him.

Onaitis recalled, “I was struck by how welcoming folks were, and (by the way) people who didn’t know me just wanted to be helpful, whether suggesting housing or local services.”

She continued, “You name it; people here were and are friendly and will give their shirt off their backs when they see a need, and that sort of gets lost in larger cities.”

As for larger cities, she grew up in Henrico County near the City of Richmond where she pursued her education after high school and gained valuable work experience.

Krystal’s mother, Kimberly Sawicki Onaitis, and her father, Joseph R. Onaitis, moved from Pittsburgh, Pa. to Va. before Krystal was born. Her mother was a registered nurse, and her father was a commercial printer. Krystal, an only child, has lost both of her parents to fatal illnesses.

After graduating from Freeman High School in 2004, Krystal earned her bachelor’s degree in political science from Virginia Commonwealth University in 2009, and she received her master’s degree in public administration from VCU in 2012.

Before arriving in Covington, she spent nearly seven years working for the City of Richmond, holding various positions at the executive level.

Starting as an advisor to Mayor Dwight C. Jones, she was later hired by the City of Richmond’s public works director.

Her extensive working knowledge of city operations and exemplary work ethic helped her become one of the youngest ever female members of Richmond’s Public Works’ executive team.

During her tenure with Richmond’s Public Works, she advanced to working for the deputy chief administrative officer for operations. Her job description was to oversee major policy, budgeting and projects for public works, public utilities, public safety projects, city-wide technology projects and animal care and control.

While working in Richmond, she led efforts to improve the logistical aspects of governing and citizen engagement through the development and implementation of RVA311, which was a corporate partnership valued at $1.6 million that Krystal landed for the City of Richmond.

During graduate school at VCU, she obtained a competitive fellowship working for the Cameron Foundation in Petersburg, Va., where she worked as a program officer. Her duties were to review and evaluate grant proposals as well as to visit sites in order to assess organization capacity.

The Cameron Foundation functions in a similar way to that of The Alleghany Foundation.

Krystal noted, “Both were formed from proceeds derived from the privatization of public hospitals.”

She revealed that throughout college and most of graduate school she worked as a preschool teacher, part-time during the school year and full-time during the summers at the Jack and Jill School.

Krystal recalled, “It was a job I loved because every day was different.”

She learned about the job opening for Covington City Manager through Virginia Municipal League in early 2019.

“After I saw the ad for the job opening in Covington, I applied,” Krystal remembered.

She noted that she had decided that she would welcome the opportunity to work in a smaller community where she might have more impact on bringing about positive change.

As for what she perceives to be the City of Covington’s biggest challenge currently, Krystal observed, “I think our biggest challenge is to bring about growth and prosperity by creating opportunities for economic development that fits.”

She cited The Landmark Group’s proposed redevelopment and revitalization of the Rivermont Elementary School as an example of a project that fits existing community character while providing much needed housing.

The $10 million-plus-project will create 49 apartments, with a mix of one, two and three bedroom units. A total of five will be reserved for seniors via project vouchers and 44 for low income earners, such as entry level employees and hourly workers.

The Rivermont Housing Project, once completed, will provide needed housing that is affordable to local seniors, individuals and families.

By converting an unused site that requires the City of Covington to bear the cost of maintaining the property, the revitalized school repurposed as a housing project will bring new opportunities to the City.

The City will benefit from the added revenue it will receive, and the project will stimulate the local economy via the increased use of utilities and the activity of the suppliers.

Krystal noted that the City plans to have the building added to the “Historic Registry” and that the history of the building that was opened as an elementary school in 1938 will be preserved and given a new life while perhaps creating interest for those visiting the area.

Another project that Krystal points to as progress being made is Project Sparkle on Main Street. The former department store was purchased by The Alleghany Foundation and a grant created for the Covington-Alleghany Industrial Development Authority (CA-IDA) to gain title to it in order to develop the property that will give Main Street a boost.

“We are thrilled to have a developer engaged and working to develop a business plan to repurpose this cornerstone property into an attraction that will serve all walks of life, creating additional buzz for our downtown,” Krystal remarked.

Currently, she is working with Interim Alleghany County Administrator Peter Huber and other officials in the Alleghany Highlands to bring about a business ready site.

Krystal confirmed, “Right now we are working as a region through our CA-IDA to plan out a 50 acre graded site within a parcel that’s a little over 100 acres in size, located in the Alleghany Regional Commerce Center, and our goal is to attract jobs and investment within the private sector.”

She continued, “We have worked through a business plan, developed marketing, and by doing this jointly, it’s collaboration through and through.”

Krystal cited the progress being made between Alleghany County Public Schools and Covington City Schools as a step in the right direction, and she specifically referred to the study of Casey Field and the Jackson River Sports Complex as another example of the regionalism cooperation that is underway.

Regarding other major projects, Krystal observed, “Last summer we identified Rt. 220 as problematic and hired a firm to conduct a road safety audit, and from that, we identified, using VDOT standards, points of conflict that impede safety and opportunities to improve multi-modal access for pedestrians and cyclists.”

“Currently, we have two transportation alternative applications advancing for crosswalks improvements and are now to submit SmartScale applications, one for a buffered bike lane, the other for creating a signalized intersection near Madison with sidewalk extensions,” Krystal noted.

She stated, “So far we have received encouragement from VDOT’s Staunton District Office, and we will know more when the Commonwealth Transportation Board meets later this spring.”

Krystal revealed, “This is currently funded by VDOT with a total of $13.4 million, with just over $10 million up front.”

The project was approved in June of 2021, and design work is expected to be completed in early 2023 with a targeted end date for construction to take place during the summer of 2026.

She stated, “VDOT is administering this project, with the City providing input.”

“We are also working on continuing improvements downtown for public gathering spaces, and one is a pocket park behind the Love Sign on Main Street which will become a green space,” Krystal confirmed.

She also noted that a shade structure for the Mid-City Mall is part of the City’s improvement plan that includes holding more downtown events to add to Street Scene and Rock the Block.

She recalled, “Both of these features were identified in the City’s recently completed Downtown Revitalization Plan, which sought extensive public input.”

Also, she said that the Nettleton property across the street from Covington High School is not safe structurally and has not been for some time.

Krystal revealed, “Plans are underway for it to be demolished except for a historic portion that can be part of the repurposing process for the property.”

She said, “This is being done to make the property useable and to let the community know that the City is stepping up its game in caring for its properties.”

“We can’t have double standards, asking private owners to maintain their properties if we aren’t working to do the same,” Krystal stated.

Since arriving in Covington, Krystal has learned to wear many hats, and she has worked in various capacities to help spearhead economic development in the City and region.

She remarked, “I’ve served as the Chair of the Alleghany Highlands Regional Economic Development Corporation (AHEDC) for the past two and a half years, and we have made tremendous progress on rebranding, marketing, site selection and working with the CA-IDA to promote site development.”

Crystal has also worked to strengthen partnerships in Roanoke with the Roanoke Regional Partnership (RRP) as well as the Virginia Economic Development Partnership (VEDP) to bring about economic development to the City of Covington and the Alleghany Highlands.

Concerning the wearing of many hats, Krystal concluded, “It gives me a unique opportunity to engage in regionalism and an opportunity to tout our area.”

Now that the omicron variant has subsided, it appears that Krystal will have a better chance of bringing about the desirable changes that she envisions for the citizens of the City of Covington.

Krystal was hired before the COVID-19 pandemic complicated life around the world as the virus and its variants spread, claiming six million lives as of March.

Vowing to roll up her sleeves and go to work in order to bring about revitalization of the City of Covington and economic prosperity along with it in July of 2019, Krystal could not have foreseen the havoc that COVID-19 would bring.

Now since masking requirements have been lifted by Governor Glenn Youngkin and a high percentage of Virginians have been vaccinated or have natural immunity after surviving the coronavirus, Krystal is optimistic that the City of Covington is on the verge of better times, despite the high rate of inflation that is gripping the nation.