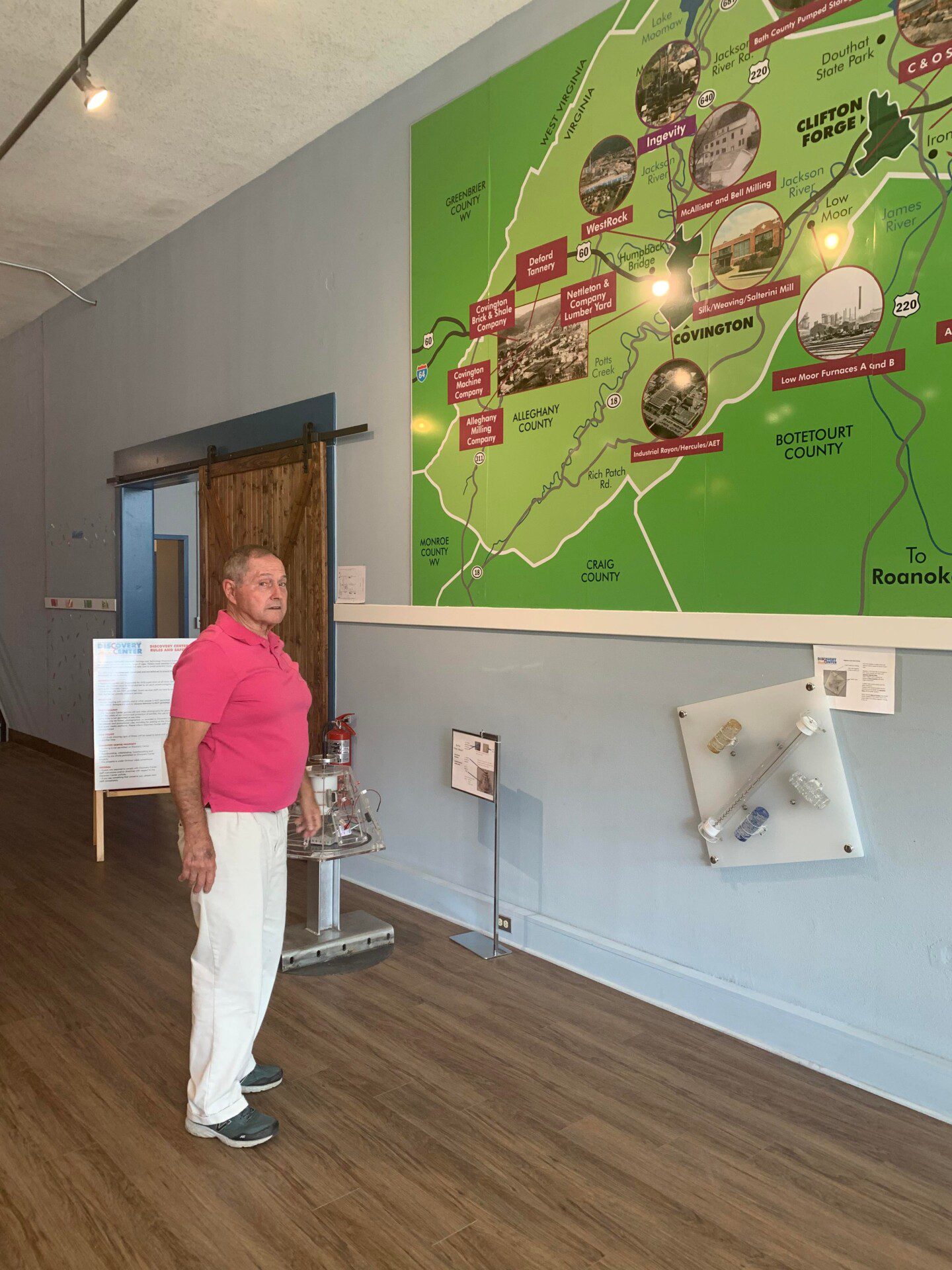 Not necessarily a Business Spotlight but something worth the share. Dr. Paul Linkenhoker was so kind to answer some of these questions for us! What a transformation!!

Tell us about The Industrial Heritage and Discovery Center?

The Center grew out of Vision 2025 which listed 5 initiatives with the Center being one of them.  That initiative was to create a museum and heritage trail which would include the C & O Heritage Center, the Wrightsville Museum. The C & O Depot, and The Industrial Heritage and Technology Discovery Center.  After some initial meetings I became involved and it was understood it would have to be a non-profit organization which could apply for funding, grants, and other opportunities that corporations could not do.  Since the establishment in 1958 of the Alleghany Historical Society it was decided there was no need to create another 501 (c) 3.  The intent of the Center is to not only capture the Industrial Heritage Center which can date back to the beginning of settlement in 1746.  The second intent was to capture and promote the emerging technology that has changed and continues to change.  The intent was not to create a static museum but an interactive museum where children and adults could actually put their hands on displays & exhibits, generate electricity, utilized forces and other technological advances.  This is not a don’t touch museum but a learn by doing and experiencing.

What inspired you to get this Center going?

I have long been active in the Historical Society and I used my education as a history major to teach school and to provide an appreciation of our heritage tradition and values.  As a retired educator, I felt I had the time, the personal contacts and passion, to make this work.  Because I was involved, I found people equally passionate and as a result I can only take a small bit of credit for this because I have had wonderful volunteers that have guided and directed the development of this Center.  I give credit to Gordon Specht, who is a retired mechanical engineer, and took care of the construction issues, and Mike Wade, a retired electrical engineer, who develops the exhibits.

What is the mission of the Center?

The mission of the Center is to reflect on the past, engage with the present, and prepare for the future.  We learn where we came from, what we are now doing and look at the possibilities for the future.  One of the goals is we live in an economy where it is rare for an individual to begin a career in one profession and keep that their whole life.  People change jobs a lot and technology are frequently required in most jobs, working with computers, different constraints, and dealing with government regulations can have an influence on a young person looking for a career.  This Center may create a spark in their minds or for an individual who sees the need to change careers.  When they are engaged with the interactive displays here, I think it will be enlightening to them and maybe create a goal for their success.

What makes the Center unique?

This Center is unique because it does not focus on just one aspect of our society which is industrial development but it also tells the history of the changes in manufacturing and product development.  It doesn’t focus on one industry; we have the forestry industry that leads to lumber to papermaking and at one time manufacturing of fibers which was known as rayon.  There were also tanneries here which were complimentary to the forest and lumber industry because they used a large amount of bark in the tanning process to create colors.  The spin off went from the forestry products to the manufacturing of iron which began before the Civil War in places like Longdale and Clifton Forge.  The initial process required a lot of fuel to run the blast furnaces and that fuel was charcoal which comes from wood.  After the Civil War the technological advance was the ability to transport coal by rail from the coal mines of West Virginia.  That created the development of coke which is coal that has been purified which made for a much hotter blast furnace.  The hotter the furnace, the pureness of the metal increases thus led to machine shops, which was a blacksmith shop on steroids because they create cast iron products.  The blacksmiths could create wrought iron which is hammered and tooled that led to an industry here of building wrought iron furniture.  The Rayon Plant which was in operation for 31 years was not the first fiber plant in Covington.  In 1918 a company out of New York started a silk mill on Hawthorne Street which eventually became a weaving mill to make cloth which also housed the Salterini wrought iron furniture.  The final story for fibers was the development of synthetic fibers used in plastic pellets called polypropylene.  The Hercules fiber company came in December of 1959 and began to create herculon fibers.  The polypropylene raw materials also led to the development of a process to create plastic film for packaging which eventually became AET.

What do you anticipate the future to be like with the Center?

I think it will be a successful endeavor like the Science Museum of Western Virginia, the C & O Railway Heritage Center, the Transportation Museum; the kid friendly, visitor friendly facilities.   I have high hopes that once the Center is fully operating it will generate more interest from people wanting to volunteer and support the project.  I know that the realism of operating facilities like the Discovery Center, the Arts & Crafts Center, the School of the Arts, and the Masonic Theatre depend on corporate, government, and individual contributions.  I believe through our volunteers, admissions and sales the Center can sustain itself and new leadership can step up to let old leadership retire.  Most importantly is the cumulative effect that bringing people to the Technology Discovery Center would improve the economic climate and rehabilitation not only for downtown Covington but the entire Alleghany Highlands.

What has been the biggest challenge?

The biggest challenge is finding the funds to complete and maintain the project.  We have been fortunate to have been the recipient of substantial funding from the Alleghany Foundation and that amount is well over $1M.  We benefited from a successful grant from the City of Covington from the Industrial Revitalization Fund of $390,000, corporate support from WestRock, Ingevity, Dominion Power, and numerous local businesses and generous individuals.  We also recently received an Enterprise Zone grant of $100,000 which has allowed us to begin operations and have the Center open four days a week, Tuesday through Friday from 12 pm to 4 pm.  By the end of the year, I hope to fully complete the ground floor and partially open the second floor where more of hands-on activities will be located.  We have also developed strong relationships with the Alleghany Highlands school division and our goal is to expand that relationship with the counties around us within a 100-mile radius.

Thank you Dr. Linkenhoker for all your hard work on this project! We are fortunate to have you here in the Alleghany Highlands!